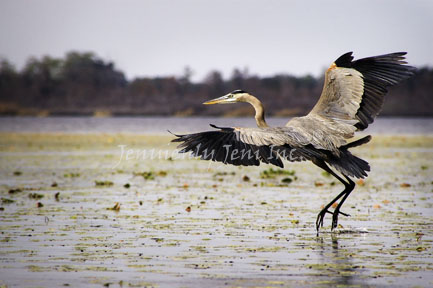 $35.00
We have several print options available, pricing will be reflected in your shopping cart.

Jenis Dancing on Water print features an individual of the great blue variety who appears to be delicately dancing atop a marsh speckled with lilies. The pose is stunning with vibrant colors and impeccable sharpness. Jeni actually photographed this rather tolerant heron on an immensely windy day from a kayak.

Much of Jenis best bird photography is taken from a kayak while floating along a river or marsh. This technique certainly presents its array of challenges, however, with some patience, the boat can serve as a wonderful tool that can be used to attain a much closer vantage point to a number of creatures residing within the marsh. A birds perception of a boat is quite a bit different than that of a human walking along the shore, often they are more forgiving and most likely feel a diminished sense of vulnerability when surrounded by swampland. Of course the speed of a kayak does present another added benefit, in instances when the subject does fly off to a more distant location, far more ground can be covered and much faster in a small boat than on foot.

The subject of this heron giclee print allowed Jeni to take a few phenomenal shots while she battled heavy winds in her kayak. Jeni would carefully approach the bird, who was quite tolerant of her presence; though insisted that a reasonable distance remain between them. It would then take off only to flutter along the top of the water and land about ten feet further away. Jeni and the heron continued this dance for quite some time, she shot continuously each time the bird would take off and land. Keeping up was difficult with forceful winds pushing her back. Strong deliberate paddle strokes were necessary to keep up and she had to maintain a tight hold on the paddle by wrapping an arm and much of her body around it to stabilize the boat , while simultaneously snapping pictures with her DSRL. The DSRL held steady by resting her other arm on one knee. Although the position may sound a bit awkward, and rest assured it was, the efforts were well worth it! The heron giclee print captures the refined grandeur of this majestic creature in a single moment of what appears to be effortless grace.