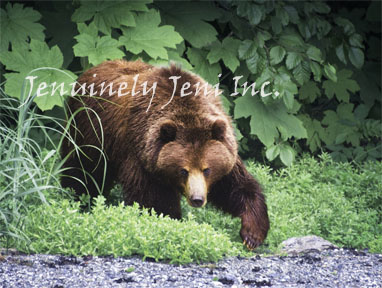 This bear is posed beautifully as it emerges from some thick brush. He pauses to consider weather photographers are on the menu for the evening and ultimately concludes that salmon would be a preferable snack!

Jeni was fortunate to capture this shot on Admiralty Island off the coast of Juno. The island is knows as the fortress of the bear. Admiralty is ideal for brown bear photography. Many photographers and wildlife enthusiasts travel great distances for the privilege of observing these magnificent animals in their natural habitat. The safety and preservation of the islands inhabitants is strictly maintained, while limited numbers are permitted to view them. Although jokes can be made about the encounter, realistically, the bears on Admiralty are known to be quite used to people and crossing paths with them while at the preserve is not uncommon.

This hansom chap emerged from the brush while Jeni and a companion were walking the beach along the outskirts of the island. They stood and watched in wonder as he strolled past them. The bear eventually stood up, surrounded by bald eagles and too a few steps upright with his back to the photographers. Naturally, they took hundreds of shots, adding to the growing portfolio they were acquiring on the wonderful trip.

Of all of Jeni prints, the Bear Emerging has been one of the most popular by far. It has certainly acquired the most amusing array of comments as well, most referencing the potential speed of the bear and questioning the zoom of her lens. The lens is, in fact, 300mms. A comment that she found particularly amusing referenced her petite frame, as if being seven feet tall would have given her better odds against a thousand pound bear, this was great for a laugh!