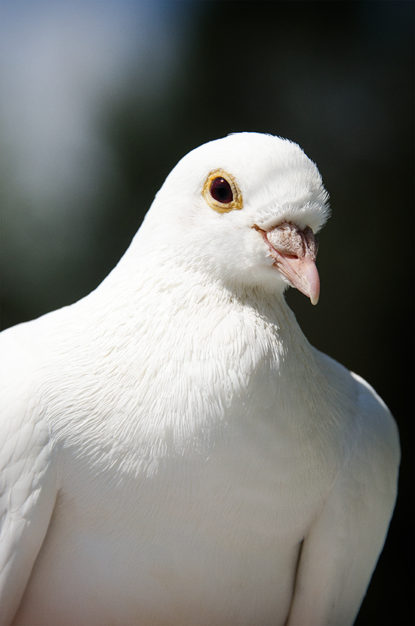 My unexpected woodchuck guest who happened by the workshop last week unwittingly became the star of his own blog article. In turn, his comical presence motivated me to tell the tales of a few more of my Appalachian animal acquaintances.

Living in a remote area does distance me from any excess of human population, but here wildlife abounds. This admittedly is more to my particular taste. For better or worse, in the country, we share our land with a wide variety of critters. One of my favorite benevolent “guests” was a lovely white homing pigeon who temporary took up residence atop the hutch that contains my oil tank. For a day or two I noticed my cat was entranced by a large white bird who sat just outside one of his favorite windows. As a house cat, he is not permitted the opportunity to stalk or eat lovely white birds like this one, so he had to resign himself to observe it from afar.

After a day or two I became concerned when I noticed the bird hardly left her chosen perch on the oil hutch. I did recognize her immediately as a pigeon and named her Harriett after my grandfather, Harry, who kept pigeons as pets when he was a young boy. Remembering the pigeons that lived along the city streets I brought out some bread to feed Harriett. I proceeded to gently toss small bits of a broken English muffin to the bird. At this, Harriett was perplexed. She couldn’t quite figure out why this strange human wanted to throw bread at her, but amused, she was content to watch and walk about the confusing crumbles.

I retreated to my shop to research pigeons and found out their dietary needs. Bread is not something pigeons should be eating, and Harriett was by no means a city pigeon.  She was a bird of much more refined tastes. Actually it was clear to see that she was domestic and had no ability to hunt for food on her own. In all seriousness she was showing signs of acute malnutrition as my research soon revealed. I took a quick trip to Petco and she was delighted to have proper seed and some grit to munch on.

In an effort to explain her mysterious appearance I learned that white homing pigeons are used as “doves” at weddings and similar events. Homing pigeons are quite smart and have an uncanny ability to find their way home over remarkably long distances. Wikipedia states that distances as far 1100 miles have been recorded during homing pigeon competitions! Adverse weather conditions can sometimes throw the birds off their course and they consequently find themselves hunkering down for a break along the way. As a side note, actual doves are exceedingly stupid and lack any ability to find their way home. It would be a cruel to release genuine doves at a wedding, as it would be their death sentence. “Doves,” as advertised, are truly white homing pigeons.

For just over a week Harriett enjoyed her vacation home on my oil hutch. She gained some strength and began to spend more time in flight and even ventured into my workshop a time or two. Eventually a weekend came when I had to travel to a show. Although my neighbor came by to feed her, once I had left she apparently resolved herself to continue her journey home.

Harriett the white homing pigeon was a delightful guest and the various woodchucks and frogs that decided to stop by for a visit were harmless enough. However, a few freeloading drifters were not quite so agreeable. Years ago I was plagued by an evil terrorist skunk! This guy veraciously waged war, frequently spraying the side of my house where the boiler takes in air. He not only fumigated my house several times, but he also turned my property into the skunk love shack of Narrows. Other skunks are attracted to that ghastly odor and will seek out locations that have been sprayed year after year… forever. In an effort to catch some skunks, which multiplied quickly, I set a trap. Yes, some skunks were caught. Then one day the local opossum discovered the trap.

Upon catching the opossum I would simply open the trap door so he could leave on his own. The trouble was, this guy quickly learned to work the system to his advantage. He rejected an honest opossum livelihood in favor of captivity with free handouts. It did not take long for him to realize that this steel cage magically produced hot dogs! I woke up one morning to find him back in the trap; I opened the door and left him once more to leave on his own. Several hours passed and this time he remained. Realizing extra efforts were necessary I tipped the cage over and dumped him out while he desperately clung to the wire mesh. To my surprise, instead of running off, he cowered close by, eyeing the trap, eager to run right back in. This was yet another victory for team skunk.

The wildlife in the country certainly provides us with all sorts of surprises and some great stories to tell! There’s no telling what they’ll get into next.