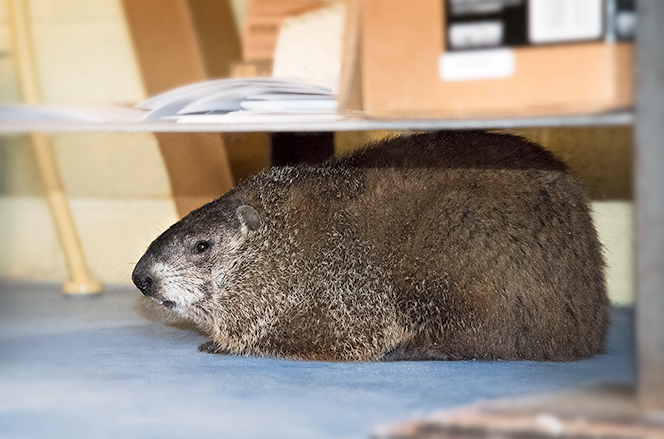 Having a weekend without a tradeshow, I strolled over to my workshop on Saturday morning ready for a day of wax carving. I sat down to check my email before embarking on the new custom project when I heard a loud rustling! I often leave my door open during nice weather. On occasion a stray field mouse will pass through only to be disappointed by the lack of edible treasures. However, judging by the sounds just to my left, this was no field mouse. I got up to investigate and dropped to hands and knees to peer under the large steel table. Gazing back at me was a rather well fed woodchuck! Naturally my first priority was to grab my camera and light to illuminate my visitor. After snapping several pictures I created a path to help guide him to freedom. Cardboard boxes, folding tables, Tupperware bins, a propane tank and various other objects created walls leading to my once again open door. More pictures ensued as I encouraged his departure from my shop. I had worked late the night before, but much of my machinery is quite loud. Therefore my music must, of course, be louder than my tools and consequently renegade woodchucks as well. I suppose Friday the thirteenth was not such a lucky day for my furry little night watchman.

Nature is full of surprises and living in the country situates you in the middle of it all. I have had countless encounters with all sorts of interesting critters. My woodchuck friend of this weekend was not the first to venture into my studio. Shortly after the shop was built and while construction was still progressing another unfortunate soul spent several days locked away in my sand blasting closet. Sand blasting sand is best kept contained and my sandblaster is in it’s own small room. Getting ready for a weekend show I closed the door to this closet and left. On Monday I heard some noises, which I simply attributed to the construction. On Wednesday I was met with quite a surprise!

It does seem astounding that something as large as a woodchuck would sneak past me so stealthily. However, smaller visitors have also appeared unexpectedly. Tiny tree peeper frogs have been known to get under the shop door in early spring. They are quite charming and take a delicate hand, or rather a business card to rescue. The most interesting reptile to grace the threshold of my shop was, however, a bright red cave salamander! On this particular evening, or morning as it were, I had been working quite late to get ready for a trip. It was about 3:00 or 4:00 in the morning and I needed to run back to the shop. In the faint light I could see some snakelike creature lounging along the door fame. I leaned forward to unlock the door and flip on the light. To my amazement a bright red lizard like critter was stretched out on the metal sill of my door frame. He was nearly six inches long, far longer than I would have expected a salamander to get. Fortunately for me he was not in any great hurry to leave. I proceeded to harass him with my camera and got a couple of excellent shots before he moved on. The cave salamander is quite rare and considered endangered in several states so having the opportunity to see one was certainly exiting!

For the moment, I will leave some of my other amusing animal anecdotes for my next blog. Those listed here were the ones who paid a visit to my place of business, others have explored and inhabited my property for better or worse. Although, Harriett, a lovely white homing pigeon, did venture into my shop at one point, she will be a subject in my next post.