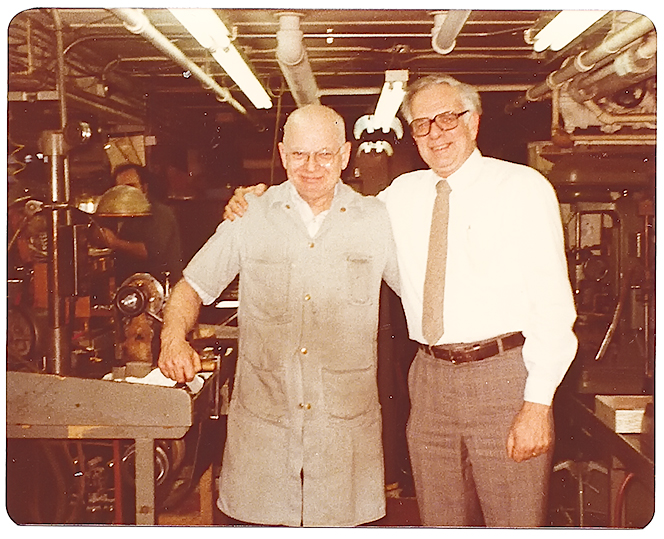 Few tools can claim such a fascinating history as the B.C. Ames lathe that I have used regularly in my business for many years now. The machine began it’s long life in the B.C. Ames factory in Waltham MA where my grandfather, Harry Kotowski, worked. This company primarily produced precision gauges that were know to be some of the best on the market. Early on the firm did manufacture lathes as well, though ultimately focus shifted to gauges.   The lathes that they did create were premier quality and became quite sought after. My Grandfather was fortunate enough to have an opportunity to procure one while working there.

Harry was the floor manager at B.C. Ames. He had a busy schedule of setting up machines for others, providing instruction, assigning jobs, and of course machining parts himself. The majority of his employees were women. His staff proved quite talented with the high degree of precision demanded by the profession.   My uncle relayed some of Harry’s reflections regarding a woman named Lina who ran 10 machines simultaneously. She was such a hard worker that she was given a chair with wheels, not because she had a disability, but because it allowed her to move faster. She would load and start the various machines on her line one by one and upon reaching the last she would race back to the first. My uncle cannot say with any certainty exactly what she manufactured, just that it was small parts.

BC Ames lathes were produced in the early 1900’s at a time when kick petals and pulleys were used as a power source. My grandfather modernized this turn of the century machine by converting it to be motor driven. I have never seen the original configuration, but I can imagine his modification must have improved efficiency and ease of use tremendously. In fact he even made a full set of collets for it. My grandfather was the type that could make or fix anything!   Harry was a talented inventor and developed a swiveling gauge to be patented under the B. C. Ames brand during his career as well.

As WWII began and developed, machinists were in high demand. My Grandfather had a special deferment that pardoned him from being drafted early in the war.  He was assigned a project to assist the war effort by making bolts for radar parts. The project was top secret and little was divulged about how the components would be used, only that they would be used in radar. The bolts were an odd shape with a large head and no threads along the top of the shank. Harry often pondered their unusual configuration, asking why anyone would want a screw that looked like that.

Harry frequently received letters obligating him to report for draft. Men were asked to bring a change of clothes and various toiletries. Time and time again, he arrived, presented his letter of pardon and was sent home. As the war was winding down he had grown accustomed to these visits and had stopped packing a bag before hand. On one such evening, my grandmother had dinner in the oven expecting him home at his usual time. I suppose Murphy’s law finally caught up, for this time his pardon was disregarded and he was put on a bus without even the opportunity to call his wife. The bus pulled into a barracks in NJ at some late hour where he was finally permitted to call home.

Most of the new recruits were young, only 18 or slightly older, while he was about 29. Due to his age he was made an MP. Harry was the son of Polish immigrants and it was his first language. Despite the fact that he was completely fluent in Polish, he was sent to Italy.  My grandfather, like many, was a kind and sensitive soul, not of a personality well suited for battle. In Italy he witnessed children begging on the streets and extreme poverty.  Much of Europe suffered under the devastating forces of Hitlers armies, seeing it first hand was quite difficult for him to endure.  As a result he did not develop any affinity for the country. After his experiences he could not imagine returning to Italy as a vacation destination. I can only imagine how much of a relief it must have been to return home after his deployment of just under a year.

However, while in Italy he did find some fulfillment in helping a young Italian engineer.  The engineer had been having trouble reading blueprints.  Harry was able to assist him with his various projects.  The engineer expressed his gratitude by giving my grandfather a marble sculpture that remains in our family to this day.

About a century after it’s manufacture, my grandfather’s lathe still works beautifully. I use it for projects of varying degrees of precision, even for findings accurate up to 100th of a millimeter. The dials slip a bit so I must stop the machine to measure frequently for these tight tolerances. However, the dials are in thousandths of inches and jewelers typically work in millimeters. The history behind my inherited tool is quite meaningful for me. Great significance lies in the fact that tools my grandfather used to make his living are now tools that support my entrepreneurial pursuits as well.