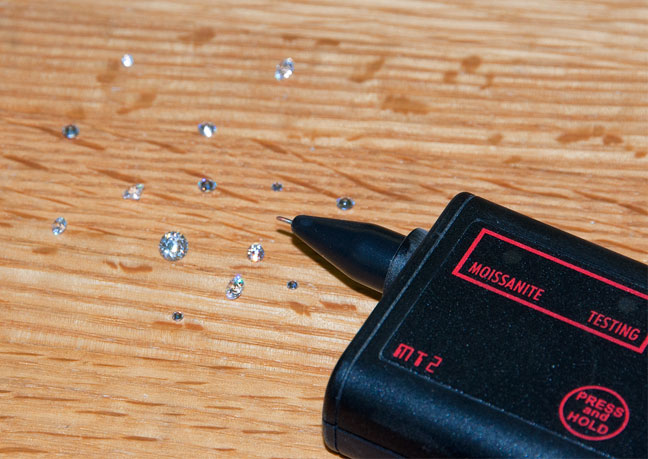 As a jeweler with training through the Gemological Institute of America, I have a deep appreciation for genuine gemstones. Diamonds have captivated women throughout the ages with their brilliant allure. They are classically associated with engagements and rightfully so with characteristics to match such a wonderful occasion. Much like true love diamonds are rare with unmatched beauty though not without a few slight inclusions or imperfections that give them each unique character. They are the hardest element on the planet, by far, with a Mohs hardness of 10. In actuality the difference between a 9 and a 10 on this scale is drastically different and far greater than the any other increment designated by the Mohs scale of gem hardness. Appropriately, this tremendous durability adds to their symbolic significance as well.

As the economy began to decline I was appalled to see more and more synthetic moissanite hit the commercial market. Several years ago I began to receive mailers from large reputable companies and see prominent advertisements promoting this atrocious stone. Due to the history behind the gem and everything it represents I would choose glass as a preferable substitute any day of the week.

Moissanite is a naturally occurring mineral discovered in the late 1800s in miniscule grains scattered throughout rocks and meteorites. However the stones promoted by the jewelry industry today are synthetic in origin. Though not necessarily created only to deceive, this synthetic material was originally used in commercial abrasives; after all it does remain a rather hard substance as a 9.5 on the Mohs scale. Its similarities to diamond are quite remarkable with one major factor that renders traditional diamond testers useless against it. What makes synthetic moissanite so deceptive is the fact that a traditional diamond tester will test positive for diamond when held to moissanite. This is because the testers are based on thermal conductivity which is the same for both stones. Due to their strikingly similar appearance and identical thermal conductivity synthetic moissanite has been used to deceive since its development up to present day. A special tester can be used to distinguish it, though it is a bit less straightforward than the diamond tester which requires a mere second or two of contact. The moissanite testers must be placed on the stone and rubbed over its surface in a circular pattern. False results can occur if improper testing is preformed. A jewelry professional should conduct this test for accurate results.

Visually, the similarities between synthetic moissanite and diamond are quite difficult to spot even for a trained professional. The subtle differences include a lower brilliance and more abundant fire; they can have a subtle greenish or yellowish hue as well. The greatest distinction, however, lies in the stones refractive index. Moissanite is double refractive meaning if you look through the stone with a ten-powered loop you will see two facets instead of one. Sounds pretty easy to spot right? Well not exactly, the doubling of the facets is slight and can be easily missed by the untrained eye. An individual that does not have a highly developed eye for diamonds would find it exceedingly difficult to recognize.

Budget not withstanding, I can fully appreciate the financial burden that a quality diamond can afford; there are certainly numerous options to choose over moissanite though. Carat size is a major factor in the cost of most genuine stone and this is especially true in the case of diamonds. A number of chic styles incorporate melee, or many small diamonds of 0.25 carats or less, into some wonderfully economical arrangements. Placing several smaller stones around a half carat can also create a lovely look that’s softer on the wallet. While certainly less traditional, some couples choose colored stones for a bold look personalized to match a favorite color or birthstone. Champagne and fancy yellow diamonds also impart their own intriguing style and frequently, but not always, in a more cost effective manor.

While I find moissanite unappealing in every aspect as you have undoubtedly gathered, I find it particularly loathsome to see it garnishing engagement rings. Its rich history of deception is something that I feel has no place in the symbolism behind any marriage. Even at a fraction of the cost of a genuine diamond, this synthetic abomination is grossly overpriced, inflated only by the perceived value of that which it is used to imitate. At the end of the day it is still a synthetic stone with no real monetary value.

*Please note I did reference my old GIA Diamond and Diamond Grading course notes to brush up on some of the history behind moissanite for accurate dates and details.