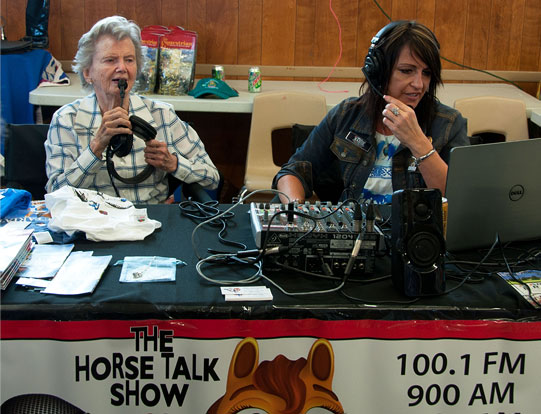 This past weekend, September 18-20th, the Secretariat Festival was held in Paris KY. The event was created to honor one of the most successful horses in Thoroughbred racing history. The Big Red Horse broke numerous national and international racing records during his career with his greatest achievement- winning the final race of the Triple Crown by an unfathomable 31 lengths! The festival was rich with history commemorating the great horse’s life and all of his achievements. Memorabilia and souvenirs based on the Secretariat’s career were available to view and/ or purchase; several celebrities also attended the event with their work cut out for them in sighing autographs for eager spectators.

I had the privilege of meeting Mrs. Penny Chenery and Mr. Charlie Davis among others! Mrs. Chenery has done some wonderful and quite admirable things for horses over the years. Secretariat was a truly remarkable horse and his bold sprit was matched by Mrs. Chernery’s determination to continue her family’s legacy with the upkeep of the farm. She emerged as a woman of tremendous strength at a time when women were not always granted the same respect naturally given to a man. Her love for horses shines through in both her words and actions. She promotes ethical treatment of the animals first and foremost and has worked diligently to create programs for retired racehorses. Throughout her lifetime she also worked to support and encourage equine health research, and has been an active member of many associations within the racing community. In 2006 she was even awarded the prestigious “Merit for Lifetime Achievement in Thoroughbred racing”. Mrs. Chenery believes that Secretariat’s greatness will never be matched, and given his outstanding success and the racing records he shattered, it’s not likely that his legacy ever will be. In an interview held by Florida Horse Talk she expressed her belief in making great horses available to their fans. Even at the age of 93, she still put in a long days work in participating in an interview and signing an endless stream of autographs for countless fans. She possesses a drive that most can only hope to sustain at 93 years young.

I found Mr. Charlie Davis’s story particularly intriguing as well, knowing very little of it beyond the fact that he excercised Secretariat, before this past weekend. He was tenacious in his love for horses and riding. With a father who wanted nothing more than to see him stay in school and undoubtedly choose a mundane traditional existence, Mr. Davis held firm to his dream. Facing all obstacles and even taking horse-training jobs illegally before he was of proper age, he was determined to outwork and outperform others competing for the same positions. Though Secretariat was certainly not the only horse he worked with, by following his calling he was ultimately available to be a vital part of racing history’s greatest champion!

I wrapped up the day with a delightful tour of Adena Springs, a breeding facility and home to many champion studs. Our tour was privileged to meet Awesome Again, Ghostzapper, and Mucho Macho Man, all of whom were brought out for a much-appreciated photo opportunity. The grounds were exquisite, with seemingly endless fields and a pristine barn created to accommodate both stallions and visiting mares during their stay at Adena Springs. The facility is exquisite, and quite idyllic for all residents of the farms, even the workers, many of whom are given posh living quarters free of charge. It’s about perfect for everyone, everyone that is, except for Tonto. Poor Tonto, a stocky paint horse, has been a teaser stud at Adena for fifteen years. The risk of a kick from an ornery mare is too great to introduce the visiting bachelorettes to one of their million dollar stallions right away. So Tonto is sent in to charm the ladies and test the waters, though not without some frustration on his part I’m sure.

Overall the festival was very well organized with activities for every member of the family to enjoy. Secretariat’s rich history was boasted through memorabilia including documentaries of the actual races and events, books highlighting the great horses career, prints, wearable items, and accessories. The wardrobes worn by Diane Lane and John Malkovitch in the Disney production were on display along side an enlarged print of the famous Time magazine cover featuring Secretariat. Also on display were prints of photographs taken at the Belmont and the other record breaking races that lead to Secretariat winning the Triple Crown and claiming his place in history as one of the greatest horses of all time.